Geographical position: 16. and 17. degree of western longitude, 28. degree of northern latidude ; circa 300 km west from  Marocco, 1300 km distance from  Spain. 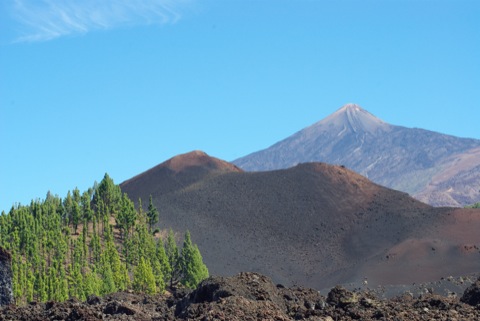 Climate Tenerife: one of the mildest Places in Europe.

Clima: Canary Island offers the mildest climate of Europe and we can say the mildest in the world. In Wintertime the daily temprature is between 20-24 C , in the night between 16-18 degree near the coastline. Because of the extreme hight of the island here you can find a lot of different  climate-levels and micro climates.
On the coastline the winter sea-temperatures are between 18-20 C degrees  and some small rainfall can happen between November and March.  In sommer  temperatures  from April – Oktober are  between 26 – 30 C  There are no  rainfalls in this period. The Atlantic warms up to 23-25 C. degrees.
There are anyway  different tempratures in  the nord and the south part of the island till   5 - 10 degrees.  When you arrive in mountain regions  at  1000 - 2000 meter  over sealevel tempratures  get  10-15 degrees  colder . In wintertime it can get cold and  snowy on top of the Teide.
We reccomend to  pack  always a  goretex- jacket  in your  backbag when you climb the mountains of Tenerife.
Tenerife Surface: 2034 km2, Length 83 km, Width 51 km 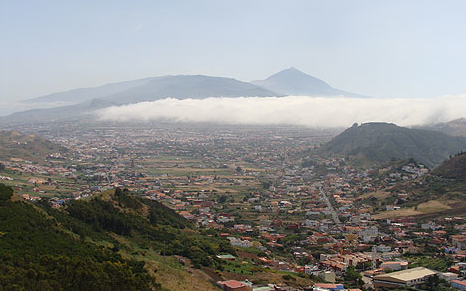 Tenerife is an autonome region of Spain

Inhabitantes: 900 000 consisting in Canarian population and Immigraters from many different countries of Europe, Africa and South-America. The aborigin population of the islands were the "Guanches". After a big resistence and defence against the spanish conquistatores, Tenerife in 1495 becames incooperated as the last of the Canarian Islands under Spain Government.

Capital: Santa Cruz de Tenerife has 200 000 inhabitants, here is located the Canarian Government: Cabildo de Islas Canarias. To Tenerife belong the western islands : Gomera, La Palma and El Hierro.
Gran Canaria an autonome region of Spain with own government and to it belong the island Fuerteventura and Lanzarote and La Graciosa.
The Port of Santa Cruz is one of the most important habours of Spain for the export to America, Africa.