HIERRO: Area size: 268 km2 Capital: Valverde Population: 11,000 people
El Hierro, formerly known as "Ferro" (Iron), and Isla del Meridiano is the western most and smallest of the seven Canary Islands. Its share of the total land surface area of all the Canary Islands is 3.59 percent. El Hierro was nominated in 2000 as a Biosphere Reserve by UNESCO. By 2011, the island will become the first island of its size, powered exclusively by renewable energy. 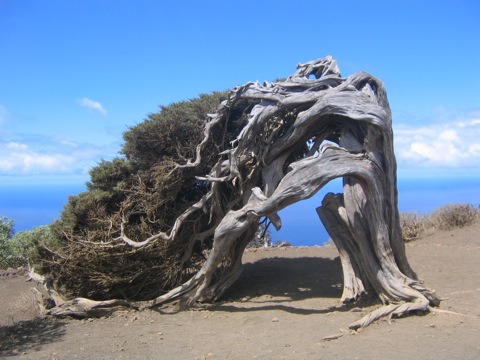 The Canaries seem in ancient times, a a distant concept, life was far away and paradisiacal. Maybe it was the Phoenicians who visited these islands. There are many myths and legends but hard evidence is poor at best. The Greek poet Homer in his odyssey around the 8th Century BC Later Hesiod sings of the Isles on the edge of the world, but whether or not this was talking about the Canary Islands is not clearly defined. 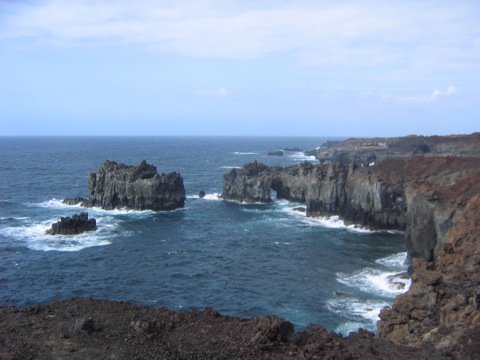 When the first settlers arrived, and where they came from, is not clearly understood. There were immigrants who fled famine in front of the expanding Sahara and possibly the devestation of their homeland by the Romans. The only certain thing is, the further north they started with seaworthy boats, the more likely they met with the Atlantic currents flowing to the Canaries. The Spanish conquerors arrived in the Canary Islands to an intact stone-age culture. The last phase of the Stone Age in the Canary Islands goes back only about 500 to 600 years.

Linguists think that settlers from northern West Africa must have come to the islands. There are similarities with the Berbers of North Africa and Libya. The settlement of El Hierro took place after the 5th Century BC instead. Herreños the people who called themselves Bimbaches, probably must have found it hard to walk on the steep coastal land. But it was probably even harder to go with the simple boats against the current back to land. Connections to the neighboring islands must have been sparse. But a legend says that a woman from La Gomera is said to have taught the Herreños to make fire.

The current name Hierro has nothing to do with the Spanish word for iron, which occurs at all on the island. Rather, the natives called their island Esero or Ero, which as much as strong, means firm or hard. 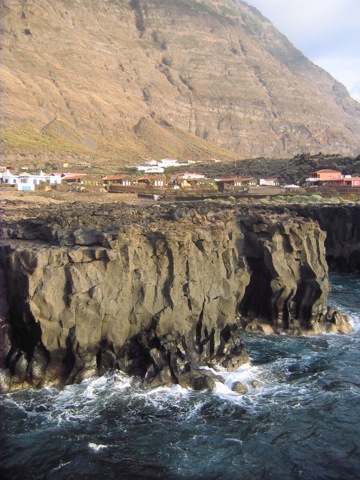 On his second trip, Columbus contributed to La Gomera and El Hierro, fresh water and food supplies. He also wanted to wait for a favorable wind, which should allow its fleet of 17 ships to move rapidly westward. After 19 days on El Hierro, on 3 October 1493, a strong trade wind finally blew from the Bahía de Naos in the New World.
FAUNA: In addition to various species of frogs, lizards are particularly common on El Hierro, like the endemic geckos Tarentola boettgerio. The most common species of lizards (Lagartos) is the small Canary Island lizard (Gallotia Caesaris) up to 35 cm in length. Often one can see the blind Canary skink (Chalcides viridanus). There are no snakes in the Canary Islands. The coastal waters are well populated with sea turtles (Caretta), the largest reptile in the archipelago.
Hierro is known for a large prehistoric lizard, Gallotia the simonyi simonyi, or Spanish: Lagarto gigante. It is certain that they are indigenous to the island since time immemorial. The species retreated to northern El Golfo valley, back to the Roques de Salmor, where towards the end of the 18th Century were rediscovered.
FLORA: Laurel forest, gale tree ferns, juniper, and many endemic species (see book: Plants leader Canary Islands,by Thomas K. Mueller)
The interior of the island, north of San Andrés up to about 1,000m above sea level. There is another landmark of the island, the Garoé (arbol santo), the sacred tree of the natives. A small information centre offers information about the history and significance of this tree, which was used by the natives as a water dispenser and revered. The recording of the sacred tree at the crest of the island illustrates its historical significance.
WALKS IN EL HIERRO
La Sabinosa – Hermita de Los Reyes
From the small village of Sabinosa we wander through vineyards and orchards to the Mirador de Bosco (a view point), with magnificent views of El Golfo. We continue towards El Sabinar and enter the nature reserve Mencafete, where we see the Juniperus turbinata, a protected plants which is sculpted by the prevailing winds into fascinating shapes. Our goal is the Hermit de Los Reyes. (Moderate, 4-5 hours, 600 m +)
La Frontera – Mirador de Jinama – Mirador de La Peña
From a small church in Frontera, we climb up to the Mirador de Jinama (1200m) (a view point). We walk through a pasture where cows and goats graze. Slowly we climb down to Hermit de la Pena (650m). Visit the Museum of the giant lizards of Salmor (Gallotia Simonyi). After the hike, you can take a swim in natural pools * (Moderate, 4-5 hours, · 550m - 900m +).